George Strait, who had his 55th No. 1 single, returned Thursday to the Country Music Association Awards with top nominations. 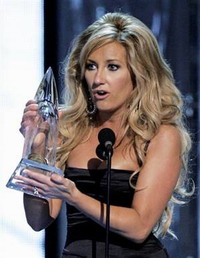 Strait and Brad Paisley led with five nominations each. Strait was also nominated for musical event of the year, for a performance with Jimmy Buffett and Alan Jackson; album of the year for "It Just Comes Natural"; and single of the year for "Wrapped," his 55th career No. 1 single.

Paisley's nominations included entertainer of the year and male vocalist. He also received nominations for his album "5th Gear," best single for "Ticks" and best music video with "Online."

Kenny Chesney, Rascal Flatts and Keith Urban rounded out the entertainer of the year category. CMA industry members have nominated only male entertainers of the year since the Dixie Chicks got a nomination in 2001.

The Chicks, who have had a troubled relationship with the country music industry since Natalie Maines' derogatory comments about President Bush in 2003, got their first nomination since then for best vocal group.

Chesney has four nominations including male vocalist, music video for "You Save Me" and musical event of the year with Tracy Lawrence and Tim McGraw.

"I've known Tracy and Tim practically since I got to Nashville," Chesney said in a statement. "Those old boys struggled with me, took off before me and never forgot who their friends were."

Josh Turner joined Chesney, Paisley, Strait and Urban as nominees for male vocalist of the year.

The CMA Awards will be presented Nov. 7 in Nashville. The show will air on ABC.

Top nominations were announced in New York on ABC's "Good Morning America" by Sara Evans and Kristian Bush and Jennifer Nettles of Sugarland.

The rest were announced at Nashville's Sommet Center by duo Montgomery Gentry and 17-year-old Taylor Swift, who was nominated for the Horizon Award for new artists.

"They kind of tortured me a little bit at the end by not saying my name right away," she said of Montgomery Gentry's nail-biting introduction. "I kind of freaked out. I was excited. I started shaking."

"The album is doing so well," Swift said. "The award nomination is a really, really nice icing on that cake."

Montgomery Gentry, who were nominated for vocal duo, lauded Strait's career and said he was one of the hardest working entertainers in country music.