Kate Walsh had a Bridezilla moment in the light of the upcoming wedding. 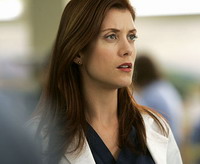 "I had a fitting a few days ago and who knew someone could get that hysterical about a bra!" the 39-year-old actress tells syndicated TV show "Entertainment Tonight" in an interview that was to air Wednesday.

She stars in the new ABC series "Private Practice," a spinoff from "Grey's Anatomy." She continues to play her popular "Grey's" character, Dr. Addison Shepherd, who leaves Seattle for work in Los Angeles.