Amy Winehouse's father-in-law calls for not buying her records 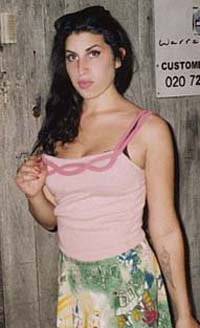 Amy Winehouse's father-in-law calls for not buying her records

Amy Winehouse’s farther-in-law said Tuesday that her fans should not buy her records to make her seek help for drug addiction.

Giles Fielder-Civil said Winehouse and his son, Blake Fielder-Civil, were in "abject denial" about their problems. He said he believed the couple had used cocaine, crack cocaine and heroin.

"I think they believe they are recreational users of drugs and they are in control," Fielder-Civil told British Broadcasting Corp. radio. "Clearly they are addicts."

He said fans should send a message "that her addiction and her behavior are not acceptable."

"Perhaps it is time to stop buying records," Fielder-Civil said. "It's a possibility, to send that message."

Winehouse, 23, has built her reputation on a soulful voice and a hard-partying image. Her most recent album, "Back to Black," topped the British charts and produced the hit single "Rehab."

Concern for the singer's health has grown since she was taken to hospital earlier this month suffering from "severe exhaustion" and spent a short stint in a rehab facility. She has since canceled a series of British concerts and postponed a tour of the U.S. and Canada.

Last week, newspaper pictures showed Winehouse and Fielder-Civil bloody and bruised, apparently after a fight in a London hotel.

U.S. gossip Web site perezhilton.com said it had received text messages from Winehouse denying Fielder-Civil was responsible for her injuries.

"Blake is the best man in the world. We would never ever harm each other," the Web site quoted Winehouse as saying. "I was cutting myself after he found me in our room about to do drugs ... and rightly said I wasn't good enough for him. I lost it and he saved my life."

Giles Fielder-Civil said Winehouse's record label, Island, should be more "pro-active in helping the couple to get better" and suggested the singer not be given awards until she cleaned up her act.

"We shouldn't be condoning her addiction by rewarding her with these awards," he said.