Troubled star Amy Winehouse has denied she was savagely attacked by husband Blake Fielder-Civil after the couple were photographed covered in blood and scratches. 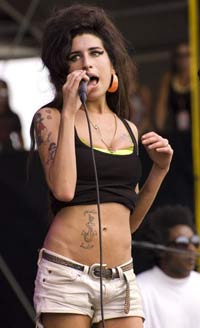 Shots of the singer sporting several bandages on her arms and walking in blood-splattered shoes with a scratched Fielder-Civil by her side appeared in Friday's The Sun.

But the Rehab hitmaker denies she was involved in a fight with her husband-of-three-months, insisting he "saved my life" after he caught her taking drugs with a female sex worker.

She tells showbiz blogger Perez Hilton, "Blake is the best man in the world. We would never ever harm each other.

"I was cutting myself after he found me in our room about to do drugs with a call girl and rightly said I wasn't good enough for him. I lost it and he saved my life, reports DotMusic.

According to DailyIndia, at around 3 in the morning on August 23, the 23-year-old was seen running out of Sanderson Hotel in Central London.

According to a source, Winehouse was chased by her hubby who had scratches on his neck.

"She was 200 yards in front. He was yelling her name. The road got to a bend and she ran round it," the Sun quoted the source, as saying.

The witness added that Winehouse stopped a young woman in a black Ford Fiesta and jumped in, but Fielder-Civil didn't notice her leaving. He kept looking for his wife in shop doorways and even wheelie-bins."When the car got to Charing Cross Amy ran to a newsagents for cigarettes. You could see she'd been in a fight. Her clothes were bloody and she was covered in scratches and bandages," the source added.

A friend of the singer revealed: "She said she and Blake injected heroin on Wednesday night. She does it between her toes as it gets her high quicker.

"They started to fight after a row about drugs. She was a blood-stained mess. She looked like an extra from a slasher movie.

"Everyone is completely terrified she’ll kill herself with drugs before the week is out," reports Digital Spy.