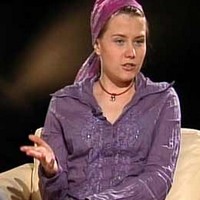 She's been pursued by paparazzi, caught in the crossfire of her quarreling estranged parents and subjected to insensitive labels like "dungeon girl."

Exactly a year has passed since Natascha Kampusch bolted to freedom from the underground cell where she was held captive for 8Ѕ years, and the obsession she touched off in Austria and around the world shows few signs of letting up.

The tabloids have tracked every twist in her story - and Thursday's anniversary of her dramatic escape on Aug. 23, 2006, was no exception.

Kampusch's father marked it by announcing he's suing his ex-wife for portraying him in an unflattering light in a new book about the family's ordeal.

Natascha, it noted wryly, marks "a year of freedom - and a year on the run."

Now 19, Kampusch was a chubby, freckle-faced 10-year-old when she vanished on her way to school on March 2, 1998. Her captor, Wolfgang Priklopil, largely confined her to a tiny underground compartment he built beneath his home in the Vienna suburb of Strasshof.

Weak, pale and emaciated, she managed to stumble out of his yard on that fateful day last summer while he was preoccupied with a cell phone call. Within hours, Priklopil, 44, committed suicide by throwing himself beneath a commuter train, ending what had been one of Austria's greatest unsolved criminal mysteries.

Since then, newspapers, magazines, TV stations, Web sites, Internet chat rooms and bloggers worldwide have obsessively chronicled her struggle to reclaim her life.

In a cover story marking the anniversary, the Austrian magazine News published photographs showing how Kampusch has been trying to make up for lost time: getting caught up on her studies, learning how to drive a car and taking up competitive bow shooting.

One showed her simply being a teenager, smiling in a sundress and a straw hat.

"It's possible that a kind of metamorphosis has already taken place with me - first the caterpillar and then the butterfly," Kampusch, who has gained weight and confidence, said in a nationally televised interview aired earlier this week.

But not all the attention has been wanted. Her lawyers appealed to the media to respect her privacy after a photographer caught her dancing with a young man at a Vienna discotheque.

Her story has drawn attention from as far away as New Zealand, where one newspaper recently dubbed her the "dungeon girl."

Kampusch's mother, Brigitta Sirny, published a tell-all book earlier this month describing her "life in hell" after her daughter was taken and neighborhoods were plastered with posters pleading for information about her whereabouts.

Her father, Ludwig Koch, told the Austria Press Agency he is taking Sirny to court over what he termed "false representations" in the book about his drinking habits. The couple divorced after the kidnapping.

In her latest TV interview, Kampusch - who uses her mother's maiden name - signaled she was uncomfortable with some of Sirny's accounts, including a claim that Kampusch still carries around a photo of the coffin containing her late captor's remains.

She did tell public broadcaster ORF that she feels more sorry for Priklopil as time passes, and that she thinks of him as "a poor soul, lost and misguided."

"It's overkill," columnist Irene Brickner wrote this week in a commentary for the daily Der Standard. "Can you not bear to hear the name Kampusch any longer? Understandable."

Yet there have been some poignant moments.

After 4-year-old Madeleine McCann of Britain vanished May 3 while vacationing at a Portuguese resort, Kampusch's mother wrote a heart-wrenching letter to the little girl's parents urging them not to give up hope.

Sirny urged the parents not to stop making public appearances, "because the worst thing that can happen to a kidnapped child is oblivion."