Associated Press-Ipsos released new poll according to which 1 in 4 U.S. adults read no books at all in the past year. Among the reading public, women and seniors were most avid, and religious works and popular fiction were the top choices. 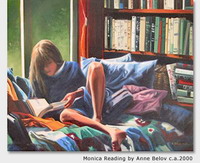 The survey reveals a nation whose book readers, on the whole, can hardly be called ravenous. The typical person claimed to have read four books in the last year - half read more and half read fewer. Excluding those who had not read any, the usual number read was seven.

"I just get sleepy when I read," said Richard Bustos, a habit with which millions of Americans can doubtless identify. Bustos, a 34-year-old project manager for a telecommunications company, said he had not read any books in the last year and would rather spend time in his backyard pool.

That choice by Bustos and others is reflected in book sales, which have been flat in recent years and are expected to stay that way indefinitely. Analysts attribute the listlessness to competition from the Internet and other media, the unsteady economy and a well-established industry with limited opportunities for expansion.

When the Gallup poll asked in 2005 how many books people had at least started - a similar but not directly comparable question - the typical answer was five. That was down from 10 in 1999, but close to the 1990 response of six.

In 2004, a National Endowment for the Arts report titled "Reading at Risk" found only 57 percent of American adults had read a book in 2002, a four percentage point drop in a decade. The study faulted television, movies and the Internet.

Who are the 27 percent of people the AP-Ipsos poll found had not read a single book this year? Nearly a third of men and a quarter of women fit that category. They tend to be older, less educated, lower income, minorities, from rural areas and less religious.

At the same time, book enthusiasts abound. Many in the survey reported reading dozens of books and said they couldn't do without them.

"I go into another world when I read," said Charlotte Fuller, 64, a retired nurse, who said she read 70 books in the last year. "I read so many sometimes I get the stories mixed up."

Among those who said they had read books, the median figure - with half reading more, half fewer - was nine books for women and five for men. The figures also indicated that those with college degrees read the most, and people aged 50 and up read more than those who are younger.

Pollyann Baird, 84, a retired school librarian, says J.K. Rowling's Harry Potter fantasy series is her favorite. But she has forced herself to not read the latest and final installment, "Harry Potter and the Deathly Hallows," because she has yet to file her income taxes this year due to an illness and worries that once she started the book, "I know I'd have to finish it."

People from the South read a bit more than those from other regions, mostly religious books and romance novels. Whites read more than blacks and Hispanics, and those who said they never attend religious services read nearly twice as many as those who attend frequently.

There was even some political variety evident, with Democrats and liberals typically reading slightly more books than Republicans and conservatives.

The Bible and religious works were read by two-thirds in the survey, more than all other categories. Popular fiction, histories, biographies and mysteries were all cited by about half, while one in five read romance novels. Every other genre - including politics, poetry and classical literature - were named by fewer than five percent of readers.

More women than men read every major category of books except for history and biography. Industry experts said that confirms their observation that men tend to prefer nonfiction.

"Fiction just doesn't interest me," said Bob Ryan, 41, who works for a construction company. "If I'm going to get a story, I'll get a movie."

The publishing business totaled $35.7 billion (26.4 billion EUR) in global sales last year, 3 percent more than the previous year, according to the Book Industry Study Group, a trade association. About 3.1 billion books were sold, an increase of less than 1 percent.

The AP-Ipsos poll was conducted from August 6 to 8 and involved telephone interviews with 1,003 adults. It had a margin of sampling error of plus or minus 3 percentage points.