Foxy Brown is accused of lying to police during a traffic stop, the latest addition to the rapper's legal woes, according to a published report. 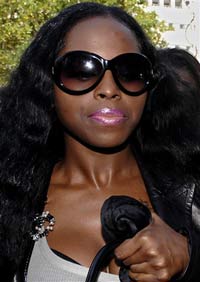 Brown, whose real name is Inga Marchand, was driving a sport utility vehicle on Wednesday when she was stopped for talking on a handheld cell phone and failing to stop at a stop sign, police told The Record of Bergen County.

After a check showed the SUV's registration had been suspended, the 27-year-old rapper gave officers a variation of her real name and a date of birth that was a year off, authorities said.

When a search for the name she gave turned up no records, the officers asked her again for the information, and she gave her correct name and date of birth, authorities said.

The officers then learned that Brown's license was suspended, and she was taken to police headquarters, where she was issued seven traffic tickets and released on her own recognizance.

She was told to appear in municipal court in Mahwah on Sept. 4.

Brown's lawyer, John L. Sampson, did not immediately respond to requests for comment by The Associated Press on Monday night.

The traffic stop came a day after Brown was arrested on suspicion of assaulting a neighbor in New York City's Brooklyn borough.

Police said that the two women got into a fight over the rapper blasting her car stereo and that, when they passed each other on the street a few days later, Brown hurled her BlackBerry device at the woman, cutting her lip and knocking a tooth loose.

Brown is already on probation after pleading guilty to assault in a 2004 dispute over paying for a manicure.