Paris Hilton is going from jailbird to songbird with a role in a movie musical about organ harvesting. 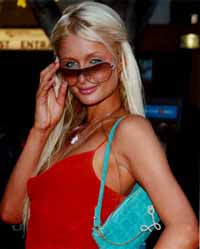 It will be Hilton's first role since she completed a 23-day stay in jail for violating probation in an alcohol-related reckless driving case, Mintz said.

The horror rock opera, based on a stage musical, is set in a plague-ravaged future where people can purchase new organs on the installment plan from a corporation called Geneco. The catch is that if the payments stop, the organs are repossessed.

Hilton will portray the fame-seeking daughter of Geneco's owner (Sorvino).

"We saw many actresses for the role, and Paris sang it better than all of them," "Repo!" producer Carl Mazzocone told the Hollywood trade paper Daily Variety in Monday editions.

"I have auditioned at least 30 actresses for this role - Paris came in and owned it," he told Variety. "She is this role."