A music publisher for rapper Eminem has filed a federal lawsuit against computer giant Apple Inc. for allowing music downloads onto iPods without permission. 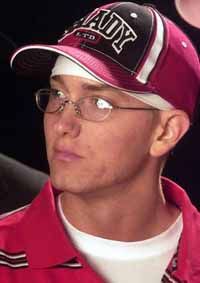 The suit, filed Monday in U.S. District Court in Detroit by Eight Mile Style and Martin Affiliated, alleges that California-based Apple has not compensated them for allowing downloads of Eminem's music.

Eight Mile Style administrator Joel Martin says the suit involves 70 to 80 songs, including tracks from the Grammy Award-winning "The Eminem Show," in which the music publisher owns copyrights or ownership interest in copyrights.

The company seeks more than $75,000 (EUR 54,716) for copyright infringement, unfair competition and a violation of the Michigan consumer protection act. It also asks for damages of up to $150,000 (EUR 109,433) per infringement - or each time a song is downloaded.

Apple had no comment Tuesday on the lawsuit, spokesman Tom Neumayr said.

"This is a significant issue in the music industry," Ankers said. "This occurs with many artists and many record labels."

Martin said Universal Music distributes the songs through the Interscope recording company and Apple offers them for download.

The lawsuit says users pay Apple a fixed fee of 99 cents to download a song. Recording companies get about 70 cents of that amount.

Eminem, whose real name is Marshall Bruce Mathers III, is from Detroit. His "The Eminem Show" sold 7.6 million copies.

"Generally, artists want their music sold," Martin said. "We want it downloaded. We request that any provider that's offering downloads license it through the publisher."

In this case, Ferndale, Michigan-based Eight Mile Style is the publisher, Martin said.

The music publisher also sued Apple in 2004 for copyright infringement. That lawsuit alleged that Apple used Eminem's "Lose Yourself" in commercial TV ads for its iTunes music store. The case was settled out of court.