The final Harry Potter book is still being translated into Chinese, but eager mainland Chinese fans have posted their own translations online, a move that could lead to counterfeit books in a country where piracy is rampant. 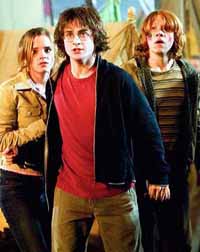 China's authorized publisher of "Harry Potter and the Deathly Hallows" on Wednesday denounced the freelance translators and urged them to delete the translations.

Users of the Potter fan Web site called the "International Wizards' Alliance" in Chinese have posted translations of several chapters of the new Potter book. Some chapters were restricted to registered users, but a reporter could access at least two chapters Wednesday without signing in.

But a notice on the Web site Wednesday said its "translation team" has been disbanded because of unspecified reasons. Contact information for the Web site's operator wasn't immediately available.

A marketing executive at Beijing-based The People's Literature Publishing House, which holds the China rights to the Harry Potter series, said it has complained to authorities about the unofficial translations.

"They should be deleted according to China's laws," Sun Shunlin told The Associated Press by phone.

Sun said, however, the publisher had no legal grounds to sue the unofficial translators, because it doesn't hold the electronic publication rights to the Potter books in China.

Sun said "Harry Potter and the Deathly Hallows" is still being translated and is scheduled to be published in China on Oct. 28.

He said piracy of the Potter series, which has sold nearly 9 million legal copies in China, has been on the decline.

China has long been the world's leading source of illegally copied goods, including designer clothes, movies and music. The country has been under pressure to crack down, especially ahead of next year's summer Olympics in Beijing.