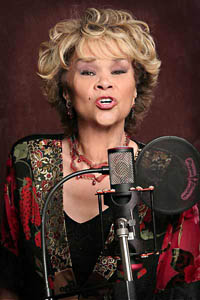 Blues singer Etta James was in stable condition Thursday after being hospitalized for complications from abdominal surgery she had last month, her manager said.

James, 69, was being treated at Cedars-Sinai Medical Center.

"Her condition is stabilized" but she had to cancel upcoming tour dates with B.B. King and Al Green, her manager, Lupe De Leon, said in an e-mail.

De Leon did not indicate when James was admitted but said the hospitalization was caused by "post-op complications" from her mid-June surgery. The complications and the nature of the surgery were not specified.

The Grammy Award-winning singer was "extremely disappointed" at having to cancel appearances, De Leon said.

"If it had been left solely up to her, she would have checked herself out of the hospital and started the tour regardless of her delicate health," De Leon said. "However, her doctor advised that were she to do so, it would put her at very great risk."

"We feel confident (that) by postponing her participation until Aug. 23, she will be in good shape to put on the kind of performance that Etta James' fans know and love," De Leon said.

During her 50-year career, James has scored a string of hits that include "At Last," "Trust In Me" and "Sunday Kind of Love."