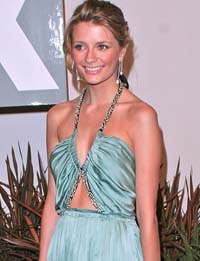 Actress Mischa Barton, former star of the hit television series "The OC," was hospitalized for two hours this Memorial Day weekend but was well enough to travel out of the country on Tuesday, her representative said.

Barton went to the hospital after an antibiotic she was taking interacted badly with alcohol, publicist Leslie Sloane said in a statement issued by her office, BWR Public Relations. "She is fine now," the statement said, adding that Barton went to an undisclosed "overseas" location to begin production on a new film.