What if you could burn fat while shaking a martini? 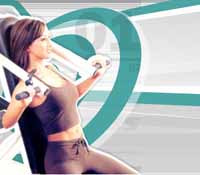 Actually, it is your body that shakes like a martini on a new type of fitness machine that is generating lots of buzz and celebrity use. Even NASA has tested the concept.

These machines use vibrations to tone muscle and claim to do it faster. Aggressive promoters also say the equipment improves flexibility and strength, reduces pain and stress, builds muscle and reverses osteoporosis.

However, researchers warn of possible injuries ranging from back pain to cartilage damage. One even warns that the high-powered jiggling might harm the brain. They say the science is thin and too little is known about the long-term effects of such powerful vibrations.

Still, NASA is studying vibration as a possible tool for reducing muscle atrophy and bone loss during astronauts' long, weightless trips in space.

And users of the equipment love the sensation and the quick workout. Workout times are reduced by two-thirds, advocates say, a claim that appeals to busy professionals, mothers of young children and just about anyone who shuns exercise.

"I feel kind of tingly and a little like I got off a ship, kind of shaky but in a good way," said Amy Allen, a 40-year-old working mother in Chicago, after a 25-minute workout on the Power Plate, one of the higher-end brands. "I'm hoping this is the solution to help me get that extra weight off."

The Power Plate vibrates 20 to 50 times a second in three directions, increasing g-forces on the body, and according to the Northbrook, Illinois-based company of the same name. The company says that raises the effectiveness of lunges, squats and other exercises done while standing on it.

The workout is not aerobic; it is more like weightlifting without weights.

"You don't really feel like you're working that hard, but then you get that sweat going and once the vibration stops, you can really feel it in your legs or upper body," said Michaela Zakheim, 45, who uses the machine at a fitness center in her Lincoln Park neighborhood.

Fitness trainers love them, but some users do not like the fact they cannot read or watch TV while working out on them, said Craig Bradley, general manager of Holmes Place, an upscale Chicago health club that has four Power Plates. Doubts also stem from memories of the belt vibrators popular 50 years ago.

Others have been won over though.

"I think the machines are as good as the imagination of the person using them," Bradley said.

Dozens of companies have entered the market, including Soloflex which has sold more than 30,000 of its $295 (Ђ218) vibrating, skateboard-like, handle-free platforms in less than three years, said Jerry Wilson, the Hillsboro, Ore.-based company's CEO and founder.

"We get reports back that it helps people with incontinence," Wilson said. "Their aches and pains have gone away. They're stronger. They sleep better. It has basically the same effects as if they'd started an exercise program."

A study at NASA's Johnson Space Center showed that the use of a vibration platform during exercise squats made muscles work more, but it didn't look at whether vibration makes athletes run faster or jump higher.

"Vibration works ... but we're still trying to figure out how to use it best and I think we're a number of years away before we do that," said Bill Amonette, one of the study authors and a fitness expert at the University of Houston-Clear Lake. "I think we have to be cautious of some of the claims. ... With aggressive marketing, sometimes they claim things that aren't necessarily true."

Some researchers are also concerned that high-amplitude vibration can be dangerous over time since it can send jarring waves throughout the body, said Andrew Abercromby, another researcher at Johnson Space Center.

"I believe, and I think quite a few other people believe, the jury is still out on it," Abercromby said.

Clinton Rubin, a biomedical engineering professor at State University of New York at Stony Brook, said he has asked Power Plate to stop citing his research in its promotional materials. His work has led to a vibration device before the Food and Drug Administration approval for prevention and reversal of bone loss from osteoporosis, but that device uses much gentler vibrations than Power Plate, Rubin said.

He believes the Power Plate's vibration levels could cause low back pain, cartilage damage, blurred vision, hearing loss and even brain damage.

"I think they are cavalier in dismissing the dangers of chronic exposure," he said. "I'm a scientist. I worry that people are going to use this device based on a misrepresentation of science."

Power Plate warns pregnant women and people with retinal detachment, blood clots, bone tumors and other medical conditions not to use the machines.

Soloflex recommends using its device only 30 minutes a day because too much use would exceed industry standards for safe vibrations in the workplace. (The Occupational Safety and Health Administration does not set safety levels for fitness equipment, an agency spokesman said.)

"I own a steel factory so I know whole body vibration has allowable exposure limits," Wilson said. "But too much aspirin is bad for one too."