WHO urges ban on smoking in public places 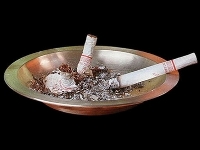 WHO urges ban on smoking in public places

The U.N. health agency issued its strongest recommendations to ban smoking at indoor workplaces and in public buildings.

"The evidence is clear. There is no safe level of exposure to secondhand tobacco smoke," said Dr. Margaret Chan, director-general of the World Health Organization. Governments should immediately pass laws "requiring all indoor workplaces and public places to be 100 percent smoke-free," she said.

Tobacco use is the world's leading cause of preventable death, accounting for 10 percent of adult fatalities, according to WHO. It is responsible for 5.4 million deaths each year, a figure that is expected to rise to 8.3 million by 2030, the agency says.

Increasing numbers of nonsmokers will also die unless governments take action, WHO said in its 50-page report. It said governments of both rich and poor countries should declare all public indoor places smoke-free, by passing laws and actively enforcing measures to ensure that "everyone has a right to breathe clean air, free from tobacco smoke."

At least 200,000 workers die each year because of exposure to smoke at their offices and factories, according to the U.N. labor agency. The U.S. Environmental Protection Agency estimates that about 3,000 deaths from lung cancer each year occur among nonsmoking Americans.

"This is not about shaming the smoker. This is not even about banning smoking," said Dr. Armando Peruga, who heads WHO's anti-tobacco campaign. "This is about society taking decisions about where to smoke and where not to smoke."

Peruga told reporters at the WHO's Geneva headquarters that the new policy recommendations were made on the basis of "indisputable" scientific evidence that secondhand smoke kills. Exposure causes heart disease and many serious respiratory and cardiovascular diseases that can lead to premature death.

He cited Ireland and Uruguay as governments that have successfully tackled smoking by creating and enforcing smoke-free environments. Legislation of the kind has proved popular among both smokers and nonsmokers, according to WHO, whose policy recommendations set broad goals for its 193 member states but are not legally binding.

Almost half the world's children - some 700 million - are exposed to air polluted by tobacco smoke, particularly at home, WHO says. The agency made its recommendations on the basis of new reports by the International Agency for Research on Cancer, the U.S. Surgeon General and the California Environmental Protection Agency.

WHO said in 2005 that it had stopped hiring smokers, as part of what it termed its "public lead" in the fight against tobacco.