A thief found out the hard way that robbing a woman isn't the best way to capture her heart. 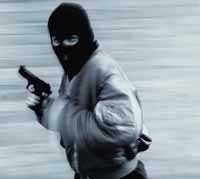 Two men robbed a U-Haul truck rental store around 3 p.m. Sunday, taking an unspecified amount of cash, according the store's owner. But instead of fleeing, one man lingered and tried to strike up a conversation with the woman he had just robbed.

"He stuck around and was trying to get the female employee's number," U-Haul general manager Patrick Sobocinski said. "She said he was just saying, 'Hey baby, you're pretty fine."'

According to Sobocinski, one robber went behind the counter, put his hands around both employees' waists and demanded money.

The robber forced one employee to open the register and grabbed cash. Then he forced the workers to the ground and fled, but his accomplice waited for a few moments and then asked one clerk whether she'd go out with him, he said.

"She said he was saying, 'Can I get your number and go out sometime,"' Sobocinski said.

No surprise ending here - the woman turned him down, and he fled.