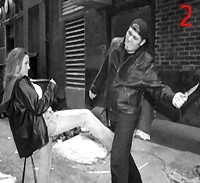 Ontario police look for a man asking women to kick in groin
Police in Ontario are looking for a man who allegedly approached women and asked them to kick him in the groin.

The various incidents allegedly occurred over the last two months.

Police Sgt. Cate Welsh said Monday the man's request is not a crime, but they are concerned it may be a precursor to sexual assault.

"That kind of behavior tends to be a precursor to sexual assault. That's what we're trying to determine," Welsh said.

The suspect is described as white, in his early twenties, with a brown goatee and a large gap between his front teeth.

None of the women reported injuries.