Tiny drain flies infested 70 pounds (31.8 kilos) of seized khat  a leafy drug  being held as evidence by police in the Pennsylvania town of Erie. 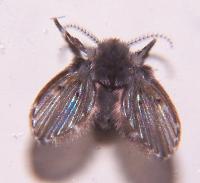 The drug can be chewed or smoked and is common in the Middle East, Africa and Asia, but relatively uncommon in northwestern Pennsylvania and is illegal in the U.S.

"We had no idea this stuff could carry bugs," said police Lt. Mike Nolan. "It's a relatively new drug around here, so it's a learning process for all of us."

Even though the trial had not started, an Erie County judge agreed to allow the drug to be burned by police, and an exterminator was brought in to rid storage room of the bugs.

Three men are still awaiting trial on charges they possessed the Khat, seized by police in March. Nolan said the case against them would go on.