Painter and sculptor Joerg Immendorff, one of Germany's best-known artists, died. He was 61. 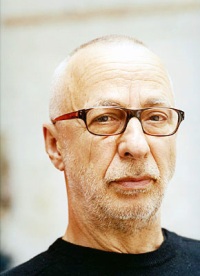 Immendorff had long suffered from the paralyzing disease ALS, also known as Lou Gehrig's disease. Thomas Meyer, the neurologist who treated him, said Immendorff died following a cardiac arrest at his home in Duesseldorf early Monday.

Born June 14, 1945, in the northern town of Bleckede, Immendorf studied under Joseph Beuys at the Duesseldorf Art Academy in the 1960s. He became involved in that decade's student protest movement.

His rejection of traditional painting in 1966, he painted the words "Stop Painting" across a picture led him to abandon the canvas temporarily and move on to his so-called "Lidl" program of neo-Dadaistic happenings, involving baby talk and symbols.

He was kicked out of the Duesseldorf school because of these activities.

Immendorff worked as an art teacher at a high school in the city from 1968 to 1980. In the 1970s he was a member of a neo-expressionist German group known as the "Neue Wilde."

Immendorff addressed Germany's post-World War II division in his best-known works, the "Cafe Deutschland" series of large paintings, which he began in 1978.

The boldly colorful canvases, set in fictitious settings such as discos and cafes, were rich in symbolism and featured figures such as the leaders of West and East Germany and playwright Bertolt Brecht.

In 1996, Immendorff became an art professor at the Duesseldorf Art Academy, which had once kicked him out.

He was a prominent supporter of Germany's center-left chancellor from 1998 to 2005, Gerhard Schroeder, and painted a portrait of the former leader to hang in the chancellery. Immendorff handed over the work painted in gold in March.