A woman who lost both legs and an arm as a child is poised to become a doctor for children. 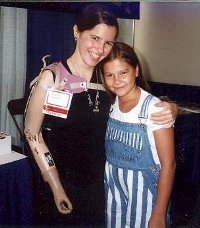 Kellie Lim, who became a triple amputee at age 8 because of bacterial meningitis, is to graduate from UCLA's medical school on Friday, and she plans to focus on childhood allergies and infections disease.

The Michigan native, 26, does not use a prosthetic arm and manages to perform most medical procedures including giving injections and taking blood with one arm. She walks on a pair of prosthetic legs.

"Just having that experience of being someone so sick and how devastating that can be not just for me but for my family too gives me a perspective that other people don't necessarily have," Lim said.

Raised by a blind mother in suburban Detroit, Lim went through years of wheelchairs and painful therapy after toxic shock from the meningitis claimed her limbs and three fingertips on her remaining hand.

Lim recently saw her childhood medical file, and learned that doctors had given her an 85 percent chance of dying of the meningitis. Just five months after the amputations, Lim returned to a normal school. Born right-handed, she learned to write and work with her left.

"I hate failing," she said. "It's one of those things that's so ingrained in me."

Lim's teachers and fellow students said she exudes a calm that makes them and her patients forget her physical circumstances.

"She has an aura of competence about her that you don't worry," said Dr. Elijah Wasson, one of Lim's supervisors. "At first you notice her hand is not there. But after about five minutes, she is so comfortable and so competent that you take her at face value."

Lim will begin a residency program at the UCLA Medical Center.