Forest guards have found the carcasses of two tiger cubs in a well in a park in northwestern India. 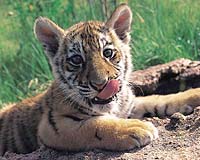 Another cub was rescued alive Wednesday from a 3-meter-deep (10-foot-deep) deep well in Ranthambore National Park, a popular tourist destination for sighting tigers, said Fateh Singh Rathod, the official who heads the park.

All the cubs are nearly three months old and were probably abandoned by their mother, Rathod said.

Authorities are investigating whether the two cubs died of hunger or were killed in some other way, Rathod told The Associated Press by telephone from the park.

Poaching and a vanishing habitat have savaged India's tiger population, which was believed to number in the tens of thousands a century ago.

Conservationists say early results of a new survey indicate that the last tiger census in 2001-02 which found about 3,500 tigers was far too optimistic.

The park, which contains a fortress built 700 years ago, was one of the first focuses of India's 33-year-old campaign to save the Bengal tiger from extinction in the wild.

The Ranthambore National Park has an area of 155 square kilometers (60 square miles).

It was once the private hunting grounds of maharajahs, or princes, of Jaipur, now the capital of Rajasthan state.