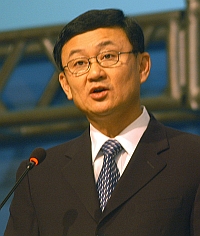 Thaskin Shinawatra, ousted Prime Minister of Thailand, was in Moscow to collect a scientific award from a Russian university, officials at the institute said Thursday.

Thaskin, who has lived outside Thailand after being ousted from power in a military coup in September, was awarded an honorary degree in science at the Plekhanov Russian Economic Academy, said Alexander Streltsov, chief scientific secretary at the university.

Thaskin's spokesman in Bangkok, Noppadol Patama, said Thaskin was in Moscow on Wednesday. Thailand's embassy in Moscow declined to comment.

The Thai army overthrew Thaskin in September, while he was on a trip to the United States, in what was the country's first military coup in 15 years. He has not been back to Thailand since then, traveling mostly between London and Asia.