Robert De Niro has asked a court to dismiss a lawsuit brought against him by Fireman's Fund Insurance Co. 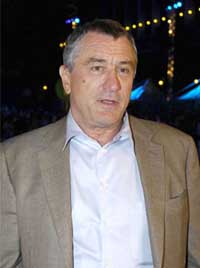 The 63-year-old Oscar winner filed a motion Friday in United States District Court seeking the dismissal of the insurance company's complaint, calling it "a case that should never have been filed."

According to court documents, De Niro was diagnosed with prostate cancer on October 15, 2003. Two days prior, on Oct. 13, 2003, he signed a medical certificate requested by Fireman's Fund stating that he had never been "diagnosed with or treated for" any prostate disorder. The actor underwent a prostate-gland biopsy on Oct. 10.

De Niro's diagnosis and resulting treatment delayed production on the Fox film "Hide and Seek," in which he was set to star. Fireman's Fund, which insured the movie production, paid Fox more than $1.8 million (euro1.34 million) to cover the cost of the delay. The film was released in January 2005.

The insurance company filed a complaint against De Niro in October 2006, claiming that the actor "failed to fully disclose information which was critical to our decision to offer insurance coverage," according to a statement issued Monday.

"As a result, the film had to be postponed for four months, at a significant cost to the motion picture production company," the statement continued. "Firemans Fund paid the resulting claim in full, honoring its policy."

According to De Niro's filing, the company's complaint is "irreparably defective, as it does not and cannot allege that Mr. De Niro made any misrepresentation to Fireman's Fund." De Niro also argues that he was improperly served with the lawsuit, claiming that legal documents were left on the windshield of a car in which he was a passenger.

The matter is scheduled to be heard in Los Angeles on June 18.