Steven Spielberg and Peter Jackson each plan to direct at least one film in a series of three movies based on the "Tintin" adventures, a collection of illustrated books about a globe-trotting Belgian reporter. 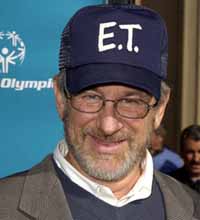 The Academy Award-winning filmmakers each will direct one of the first two "Tintin" films and will determine later who will make the third, Spielberg spokesman Marvin Levy said Tuesday.

A timetable for production and release of the films had not been set, Levy said.

Spielberg and Jackson have chosen three stories from the two-dozen Tintin books created by Georges Remi, who published the books under the pen name Herge.

The films will be created through motion-capture technology, in which digital renderings are made of performances by live actors, with computer imagery added to create a combination of live action layered with digital animation.

Jackson used similar technology to create his giant ape in "King Kong" and the Gollum character in "The Lord of the Rings" trilogy.

"We want Tintin's adventures to have the reality of a live-action film, and yet Peter and I felt that shooting them in a traditional live-action format would simply not honor the distinctive look of the characters and world that Herge created," Spielberg said in a news release.

For more than a year, Jackson's Weta Digital effects outfit has been testing the technology to re-create the look of the Tintin characters, he said.

The reproductions are lifelike, "faithfully replicating Herge's original designs, but not rendering them as cartoons, or the familiar looking computer-animated characters," Jackson said. "Instead, we're making them look photo realistic, the fibers of their clothing, the pores of their skin and each individual hair. They look exactly like real people, but real Herge people."

Spielberg producing partner Kathleen Kennedy will produce the films along with Spielberg and Jackson.

The announcement came just a week before the 100th anniversary of the birth of Herge, who died in 1983.