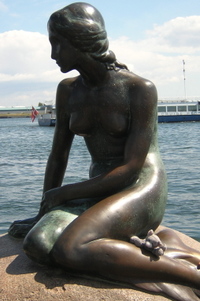 For the second time since March Little Mermaid stature in Copenhagen has been defaced be vandals – now it was covered with paint.

Tourists flocked to the landmark Tuesday to take snapshots of the bronze statue, whose face, left arm and lap had been doused with red paint.

A wooden picture frame sat next to the statue, with the word "AV" - Danish for "ouch" - written in green.

Police said they did not know who had defaced the statue, or whether it was connected to overnight clashes between riot police and rock-throwing youths near Copenhagen's hippie district Christiania.

The Little Mermaid was created by Danish sculptor Edvard Eriksen in tribute to Danish storyteller Hans Christian Andersen. Sitting on a rock at the entrance of the Copenhagen harbor since 1913, she draws an estimated 1 million visitors a year, and has become a popular target for vandals.

Four years ago, the statue was blown off her perch by culprits who used explosives.

She has been beheaded and doused in paint several times. On March 3, vandals covered the statue with pink paint, which was quickly removed by a cleanup crew with soap and high-pressure water cleaners.