Four months after she died from an accidental overdose, Anna Nicole Smith's six-year-old will was filed Monday by her attorney and companion Howard K. Stern. 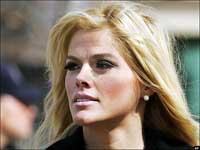 The document filed in Superior Court leaves assets estimated at $710,000 to Smith's now-deceased son Daniel and also gives Stern custody of Daniel, who was a minor in 2001 when the will was written.

Daniel was 20 when he died in September in the Bahamas from a lethal combination of drugs, days after the former reality TV star and Playboy Playmate gave birth to daughter Dannielynn, who was briefly thought to have been fathered by Stern before paternity tests showed the father was Larry Birkhead, a photographer.

In a probate petition signed May 7 by Stern, he asked a judge to recognize that the document was Smith's last will and that he was its main executor. The document also names Dannielynn as Smith's survivor, and Birkhead as the infant's father.

The probate proceeding to sort out Smith's assets, debts and taxes will lead to the establishment of a trust with 8-month-old Dannielynn as its sole beneficiary, said Stern's attorney Bruce S. Ross.

With the trust, the girl could inherit the estate of Smith's late husband, the Texas oil tycoon J. Howard Marshall II, estimated to be worth $500 million (EURO 369 million).

Birkhead also filed papers Monday to ask a judge to appoint him as guardian of Dannielynn's estate.

"As the child's father and caregiver, (Birkhead) is in the best position to protect and safeguard the interests of his child as guardian of her estate, including her interests in the estate of her deceased mother," the petition said.

A June 19 hearing was scheduled to hear both petitions.

Smith was 39 when she died Feb. 8 in Florida from a mix of prescription drugs.