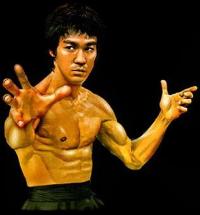 Family of Bruce Lee and a respected Hong Kong director are negotiating about the new film about the star.

Stanley Kwan said his movie will explore how Lee was influenced by the absence of his father, and how he brought up his own son, Brandon Lee. It will also look at how Bruce Lee turned into a master of martial arts, he said.

Both Bruce and Brandon Lee died when they were relatively young.

Bruce Lee died in 1973 at age 32 from swelling of the brain. Brandon, who also became an actor, was killed on the set of the film "The Crow" in 1993 when a prop gun that supposedly held blank bullets discharged a live one.

In April, Chinese state media reported that the country's national broadcaster has started filming a 40-part TV series on Bruce Lee in an apparent bid to promote Chinese culture ahead of next year's Beijing Summer Olympics.

Kwan said in a phone interview that no casting decisions have been made and that his movie's budget hasn't been set.

He said the project, which won't start shooting until next year at the earliest, is backed by mainland Chinese funding but that he will also try to raise funds from foreign investors.

Kwan said the dialogue will be in both Chinese and English depending on the setting.

Bruce Lee was born in San Francisco but his family returned to Hong Kong, where he grew up. He went back to the United States to study philosophy at the University of Washington and married in 1964 in Seattle, where he opened his first martial arts school.

He later opened a school in Los Angeles where a producer saw him in a kung fu demonstration and cast him as Kato in the "Green Hornet" TV show.