Carmen Gonzalez plucks one of the 50 frogs from the aquarium at her bus stop restaurant, bangs it against tiles to kill it and then makes two incisions along its belly and peels off the skin as if husking corn. 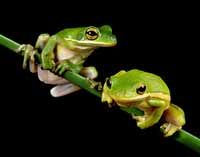 She's preparing frog juice, a beverage revered by some Andean cultures for having the power to cure asthma, bronchitis, sluggishness and a low sex drive. A drink of so-called "Peruvian Viagra" sells for 90 U.S. cents (EURO 0.65).

Then she drops the frog in.

Once strained, the result is a starchy, milkshake-like liquid that stings the throat.

At least 50 customers a day ask for steaming beer mugs of frog juice at Gonzalez's countertop-only restaurant in eastern Lima, and many treat the concoction as their morning - and afternoon - cup of coffee.

Rebeca Borja, a 53-year-old housewife and mother of five, originally from Lima's central highland city of Huancayo, where the beverage is common, said simply: "It gives you power."