Disgraced radio host Don Imus, fired for racist and sexist comments plans a lawsuit against CBS Radio to collect the huge unpaid portion of his salary. 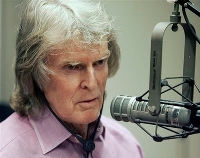 "We expect to file a complaint by the end of next week alleging breach of contract," said Martin Garbus, a free speech attorney whose past clients include comedian Lenny Bruce, the rap group Public Enemy and filmmaker Spike Lee.

Garbus cited a clause in the 66-year-old Imus' contact with CBS in which the company acknowledged the National Broadcasters Hall of Fame inductee's services were "unique, extraordinary, irreverent, intellectual, topical, controversial."

The clause said Imus's programming was "desired by company and ... consistent with company rules and policy," according to Garbus.

Imus was fired last month when he raised a firestorm of criticism after referring to the Rutgers college women's basketball team as "nappy-head hos." "Nappy-headed" is a reference to the hair of some black people, while "ho" is slang for "whore."

CBS Radio spokeswoman Karen Mateo did not immediately return a call seeking comment. Garbus said the papers would be filed in state Supreme Court in Manhattan.