The 52-room mansion that rapper 50 Cent has called home for more than three years is up for sale. 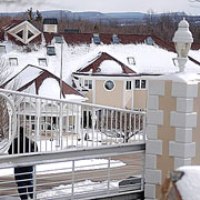 Since buying the mansion, 50 Cent has reportedly spent up to $6 million (EUR4.4 million) renovating the house, including adding a helicopter pad.

Curt Clemens, owner of Century 21 Clemens & Sons in Hartford, told the Hartford Courant Wednesday that he toured the house a few months ago after being contacted by representatives of the rapper who said he wanted to sell the property.

Clemens, who was the listing agent on the house when it was owned by Tyson, said that he was notified a few weeks ago that another real estate agent would be handling the sale.

"I was surprised it hadn't come on the market because we were expecting it," Clemens said. "He's put a lot into it, and it's all very tasteful, except the stripper poles."