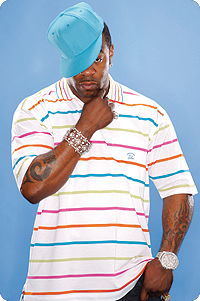 Busta Rhymes got another legal problem on Thursday. He was arrested for drunk driving in New York.

Officers stopped Rhymes at about 12:40 a.m. because the sport utility vehicle he was driving had overly tinted windows, Sgt. Mike Wysokowski said. He said officers then smelled alcohol on the rapper's breath.

Rhymes, 34, was taken into custody on a charge of driving while impaired, Wysokowski said. An arraignment was expected later Thursday.

A lawyer for Rhymes, Scott Leemon, declined to comment early Thursday, saying he would address the charges in court.

A telephone message left early Thursday at the New York office of Rhymes' manager, Violator Management, was not immediately returned.

Rhymes, whose real name is Trevor Smith, has had several law enforcement run-ins since last year.

He is tentatively scheduled to go to trial Tuesday on two assault charges. In one of those cases, prosecutors have accused him of beating and kicking his former driver, Edward Hatchett, 39, during a Dec. 26 pay dispute outside Rhymes' lower Manhattan office.

In the other case, Rhymes is charged with assaulting a fan after an Aug. 12 performance at the AmsterJam Music Festival.

While Rhymes was awaiting trial on those charges, he was jailed briefly in February after police said they stopped him for running a red light and discovered he was driving with a suspended license.

In November, Rhymes was issued a ticket after police said they saw him talking on his cell phone while he was driving past a police station.

Police also have sought to question the rapper as a potential witness in the February 2006 shooting death of his bodyguard, Israel Ramirez.

Rhymes, known for outlandish outfits and antic performance style, has hits that include "Put Your Hands Where My Eyes Could See," "Dangerous" and "Touch It." He also has appeared in movies, including "Shaft" and "Finding Forrester."