Keys to Iowa prison are for sale on Internet auction site 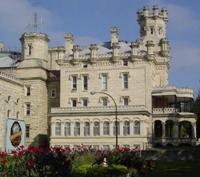 Keys to Iowa prison are for sale on Internet auction site

Keys to the Anamosa State Penitentiary in Iowa are for sale on the Internet auction site, prompting a change of locks.

The keys belonged to a locksmith who retired from the prison in 1974. He died two years later and when his wife died last year, an auctioneer was hired to sell off the estate, which included the keys.

Someone bought the keys and put them up for sale on eBay, claiming that some still work.

Jerry Burt, the prison's warden, said he does not know how the retired locksmith gained possession of the keys.

Burt said some locks at the maximum-security prison have been changed since 1974 while others have not, prompting the recent change.

"We did it as a precaution," Burt said.