Fellow astronauts described Lisa Nowak as smart, hardworking and a good mother, but also selfish and unwilling to perform tasks for which she had not trained, according to documents released by the state attorney's office. 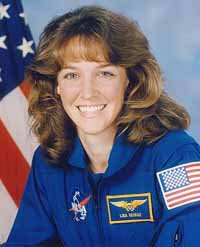 That glimpse into the astronaut's life was found in almost 150 pages of documents that include summaries of interviews with four astronauts following Nowak's arrest in February on charges of attempted kidnapping, burglary with assault and battery.

Police said she drove from Houston to Orlando to confront Air Force Capt. Colleen Shipman. Authorities have said Nowak had an affair with Shipman's boyfriend, Bill Oefelein, a fellow astronaut.

Nowak, 43, has pleaded not guilty to all charges. NASA released her from the astronaut corps a month after her arrest, and she now is working at the Naval Air Station Corpus Christi.

The four astronauts - two who flew on a space shuttle mission with Nowak last July and two who flew with Oefelein last December - were interviewed by investigators with NASA's Office of Inspector General and the Naval Criminal Investigative Services.

They said she refused to give out her cell phone number to her fellow astronauts on last July's space shuttle mission to the international space station and was noticeably upset when a colleague was chosen over her in December to go on a future shuttle mission.

Oefelein told investigators that Nowak had two cell phones - one that she paid for and another that Oefelein had given her and paid the monthly bill for service.

The day after Oefelein returned to Earth from the international space station in December, one of his cell phone numbers dialed the other a dozen times and sent seven text messages.

The phone records given to the investigators do nt distinguish which number belonged to whom, since both numbers were paid for by Oefelein.

Madeline Chulumovich, executive officer at the Office of Inspector General, said the office's policy prohibited her from saying whether the investigators were assisting in the criminal case or whether there was a separate investigation by the space agency.

NASA rules do not prohibit relationships between astronauts, but Nowak and Oefelein kept the affair secret. Nowak was married and had three children, while Oefelein, who has two children, divorced his wife in 2005.

Astronaut Mike Fossum, who flew with Nowak aboard space shuttle Discovery last July, told investigators that over the years he grew to suspect that Nowak and Oefelein were having an affair.

Fossum once saw Oefelein and Nowak fly to Key West together on a training jet after Nowak had apparently lied to another crew member about where she was going.

Fossum also saw Nowak and Oefelein in the hallway of crew quarters at Kennedy Space Center before Discovery's flight last July. "Fossum stated that this was odd because very few individuals other than crew members had reason to be in the area," the investigative summary said.

The relationship did not affect their work, Fossum said, so he never mentioned anything to anyone.

Days before her arrest in February, Nowak asked a scheduler to arrange scuba training and all-day flight practice with Oefelein for her, the investigative summary said. Nowak also was persistent in trying to get the schedule of Oefelein and his crew after they returned from their mission.

Investigators tried to interview Nowak's estranged husband, from whom she separated in January, but he refused.

Astronaut Mark Kelly, who was the pilot on Nowak's flight to the space station, said he was unaware of Nowak's relationship with Oefelein. He described Nowak as smart and well-prepared but told investigators he didn't like her.

"She was not a good team player, and he learned in space that she exhibited bad expedition behavior because she was selfish," the investigative summary said.