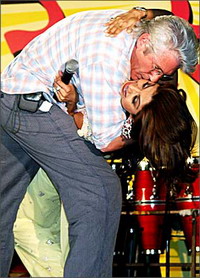 It seems that Richard Gere’s love for India does not spread to Indian jail. So he tried to pacify the storm over the kiss he gave a Bollywood star at an AIDS awareness event, apologizing Friday for any offense.

Gere's embrace and kiss of actress Shilpa Shetty sparked several noisy demonstrations by hard-line Hindu groups and a flurry of legal complaints, which ended with a judge in the northwestern city of Jaipur issuing an arrest warrant for the two stars for violating obscenity laws.

"What is most important to me is that my intentions as an HIV/AIDS advocate be made clear, and that my friends in India understand that it has never been, nor could it ever be, my intention to offend you," Gere said in statement issued by the Heroes Project, an organization co-founded by Gere to combat AIDS in India.

"If that has happened, of course it is easy for me to offer a sincere apology," he said.

The embrace, in front of some 4,000 truckers, was a failed parody of a move from his film "Shall We Dance" and "a naive misread of Indian customs," Gere said.

Gere had earlier taken a harder tone, hitting back at a small group who had complained earlier.

"There is a very small, right-wing, very conservative political party in India, and they are the moral police in India and they do this kind of thing quite often," Gere told Comedy Central's "The Daily Show With Jon Stewart" on Thursday.

Gere said he was confident the issue would be sorted out.

"I don't know that any one has actually gone to jail. It has to go through a process. It goes to a reputable court, and they throw it out," he said on the TV show. Under Indian law, a person convicted of public obscenity faces up to three months in prison, a fine, or both.

Gere, who left India shortly after the kissing incident, is a frequent visitor to India, promoting health issues and the cause of Tibetan exiles. The Tibetan spiritual leader, the Dalai Lama, has his headquarters in the northern Indian town of Dharmsala.

On Friday Gere won support from lawyers and legal experts in India, who slammed the Jaipur court ruling.

"Magistrates should not act like Taliban moral police," Sorabjee added.

Another senior lawyer called the order "an act of judicial indecency."

"This is only for cheap publicity and the magistrate and lawyer should be restrained," Dushyant Dave told the newspaper.

The kiss had made headlines, and photographs were splashed across front pages in India, where public displays of affection are largely taboo.

In his statement, Gere appealed to the media to let the controversy die.

"I would hope that the media could now end the circus around this episode and dedicate its positive resources and expertise to the eradication of HIV/AIDS and other preventable diseases," Gere said. "That's what's really important here."

Gere said Shetty was not to blame for the incident.

"I've felt terrible that she should carry a burden that is no fault of hers," he said.

Shetty, already well known in India, became an international star after her appearance on the British reality show "Celebrity Big Brother." A fellow contestant, Jade Goody, sparked international headlines by allegedly making racist comments to Shetty. Mobs took to the streets of India to denounce Goody, and Shetty went on to win the competition.