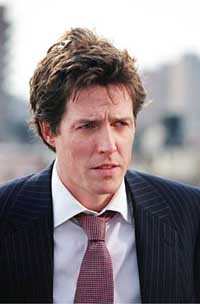 Grant sued Associated Newspapers, publisher of the Daily Mail and Mail on Sunday newspapers, over stories published in February.

One alleged that Grant's relationship with Khan was destroyed by a flirtation with a film executive. Another claimed Grant would attend Hurley's wedding to businessman Arun Nayar and had sponsored a chimpanzee at a British zoo as a gift. A third said he resented having to do publicity for his films.

Grant's lawyer, Simon Smith, said "all of the above allegations and factual assertions are false."

Grant, 46, was not at London's High Court for the ruling. Smith said the actor would give the damages money to a cancer charity.

In a statement, Grant said he had taken legal action because he was tired of the newspapers "publishing almost entirely fictional articles about my private life for their own financial gain."

"I'm also hoping that this statement in court might remind people that the so-called 'close friends' or 'close sources' on which these stories claim to be based almost never exist," he said.

Associated Newspapers apologized to the actor and agreed to pay his legal costs.

The ruling is Grant's second legal encounter this week. On Wednesday, he was detained by police over allegations that he threw a container of baked beans at a paparazzi photographer.

The actor, whose films include "Four Weddings and a Funeral," "Notting Hill" and "About a Boy," was arrested on suspicion of assault and released on bail. He has not been charged.