A man was charged with felony theft after he spent US$80,000 (EUR59,000) his bank deposited by mistake in his account. 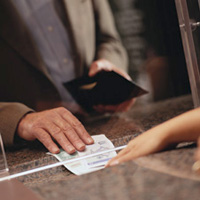 George J. Costa, 45, is charged with theft of lost or mislaid property. It is a crime to take money that has been "delivered under a mistake."

More than US$106,000 (EUR78,000) was deposited into Costa's account between August 2006 and February after a Pinnacle Bank employee mixed up account numbers, according to the Nebraska State Patrol.

Costa's lawyer, James Martin Davis, said Costa is willing to work out repayment in civil court but should not be charged criminally.

"If somebody sticks money in your pocket and you spend it, you can't be convicted of theft," he said.