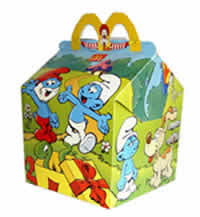 What a surprise! Could a grandmother imagine that there will be a condom in a happy meal gift which she bought for her 7-year-old granddaughter at a McDonald's restaurant in New Zealand?

The condom was discovered Tuesday night in a bag that came with Maia Whitaker's meal, which her grandparents bought at a McDonald's outlet in the city of Wellington.

Grandpa Rowan Hutch told The Dominion Post newspaper it was lucky his wife was first to look inside the small sports bag that came with the meal.

She was aghast when she found the green condom and its packet inside the bag, he said.

"I was pretty horrified really. The fact my granddaughter was going to look in the bag and find this thing. It would be difficult to explain, she's only seven," said Hutch.

The outlet quickly swapped the happy meal for a hamburger and pencil case. McDonald's is investigating the find.

Spokeswoman Joanna Redfern-Hardisty said because of its popularity, the previous happy meal gift had sold out at the outlet and prepackaged sports bags were substituted as children's gifts.

One was left unsealed for display purposes and "somehow" had ended up with the customer, she said, without explaining why the condom was present.