A man who went to a post office in the U.S. state of Missouri to pick up a novelty phone he ordered over the Internet was alarmed that the package was ticking and it created a bomb scare. 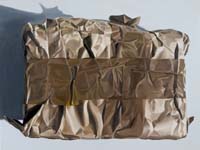 It turned out that the phone - shaped like Winnie the Pooh - had a feature the customer did not know about: An incoming call causes Winnie's head to spin, and the feature apparently had been activated during shipping.

Police and members of the bomb squad were called when the man retrieving the package noticed the unexpected sound. Wright City is about 45 miles (70 kilometers) west of St. Louis.

"It was pretty distinctly ticking," Police Chief Don Wickenhauser said. "And he didn't want to pick it up."

When authorities contacted the sender, he verified that it was nothing sinister.

Scerine said authorities were both amused and relieved when they opened the package.

"I guess the moral of the story is before you send electronics, take the batteries out," she said.