Popular polar bear cub, Knut, in the Berlin Zoo is not feeling well and had his daily public appearance in front of thousands of visitors cut short after only 30 minutes. 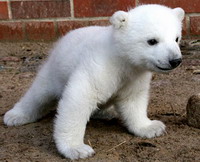 The zoo's veterinarian, Andre Schuele, put the 4½-month old cub on antibiotics and said the Knut is "off stage to get some rest while we watch him closely."

"At the moment he is resting on his blanket and sleeping," Schuele said, adding that despite his lethargy Knut did eat his regular meal in the morning.

Later Monday, Schuele told the Associated Press he examined the cub and said Knut is probably not feeling well because he is teething.

"He is getting his right upper canine," Schuele said.

Thousands of people line up each day to see the cub, and his button-eyed face has been a fixture for newspapers, television and the Internet.

Born at the zoo on Dec. 5, Knut - who was rejected by his mother and hand-raised by zookeepers - rose to fame last month thanks to television and newspaper pictures. So potent is his appeal that zoo attendance has roughly doubled to 15,000 on average daily since his debut, officials said. He has his own blog and TV show and appeared on the cover of Vanity Fair.

Veterinarian Schuele did not know if Knut would be strong enough for public appearances in the next days.