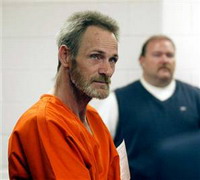 The jury selection was to begin Monday in the case against the man convicted for the sexual abusing. He is accused of kidnapping, raping and holding captive two girls in the underground room of his South Carolina house.

Kenneth Glenn Hinson, 48, was arrested in March 2006 and has been charged with criminal sexual assault, kidnapping and assault and battery with intent to kill.

The case attracted national attention when South Carolina Attorney General Henry McMaster said during a four-day manhunt that Hinson - convicted in 1991 for the rape of a 12-year-old girl - could have been indefinitely committed to a state program for sexually violent predators after serving a nine-year prison sentence. Two review committees had recommended that Hinson be placed in the program, warning he could commit a future sex crime.

But Judge Edward Cottingham rejected the plan and set Hinson free. After Hinson's arrest, McMaster argued it was that crucial mistake on Cottingham's part that paved the way for Hinson to assault the teens in the dungeon-like space beneath his home.

Cottingham, a retired but active judge, has said he does not remember the 2000 case. Last year, Hinson appeared before Cottingham as McMaster presented his notice to seek a sentence of life without parole in the new charges.

The girls were sexually assaulted and left bound inside the underground room, but managed to free themselves and get to safety, authorities have said.

The room was just 4 1/2 feet (1.4 meters) deep and roughly the length and width of a midsize car. Its floor and walls were lined with wood. A single 75-watt bulb illuminated the space.

Jurors will be selected from another county in South Carolina because the case received so much publicity in Hinson's county of residence. They will be sequestered.

Rick Hoefer, Hinson's attorney, declined to make his client available for interviews and has refused to comment about the case before the trial.

On his own, however, Hinson has made repeated attempts to speak with media. Leaving a hearing last month, Hinson told reporters he was innocent of the charges.