Malawi awaits the return of Madonna

Preparations are under way for a return visit to Malawi by pop star Madonna, whose plans to adopt Malawian toddler David Banda last fall sparked an international controversy. 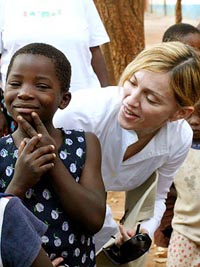 Malawi awaits the return of Madonna

She is expected to fly into the southern African country on Monday, but there has been no confirmation of this.

The orphanages and care centers she is involved with have been freshly painted and spruced up, while security around the exclusive lodge where the star stayed last year has been tightened.

Her New York-based publicist, Liz Rosenberg, said the star was going to Africa to continue her work with the Raising Malawi organization, which supports the country's many AIDS orphans.

Sources at Kumbali Lodge, the tree-covered ranch in Lilongwe where Madonna and her entourage stayed in October, say her security team have arrived.

Madonna, 48, and her filmmaker husband Guy Ritchie were granted an interim court order on Oct. 12 allowing them to take initial custody of then 14-month-old David. Malawian child welfare officials are expected to file a report on the suitability of the Ritchies as adoptive parents after two trips to their London residence in May and December.

Rumors that Madonna was to adopt another child have been strongly denied.

"She is overseeing the building of a children's health care center. She is absolutely not adopting another baby," said Rosenberg in a statement.

Yacinta Chapomba, a director of local aid group Consol Homes, which has been involved with Madonna's organization in the building of a children's care center, said an official opening ceremony would be held at the center on Monday. She could not confirm whether the star would attend.

The center in the impoverished village of Mphandula, 50 kilometers (30 miles) outside the capital Lilongwe, will initially house 400 children who lost their parents to AIDS.

Madonna's last visit was shrouded in secrecy, and the star made no comment to reporters but was seen singing and dancing with children at orphanages.