Despite being denied a permit by police to buy a handgun last month, Anthony LaCalamita III had no trouble buying a shotgun a few weeks later. 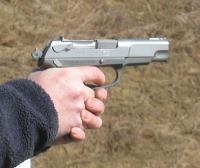 Police say the accountant bought the 12-gauge shotgun April 6 - the day after he was fired - and used it three days later to shoot three people at his former office in a Detroit suburb, killing a secretary and wounding two executives.

LaCalamita, 38, was able to buy the shotgun because Michigan, like all but four U.S. states, does not require a permit to buy a shotgun or rifle. Michigan is one of only 12 states that require background checks for handgun buyers, but those buying shotguns or rifles need only pass an FBI criminal background check.

The discrepancy is a legal loophole that needs to be closed, say gun control advocates like Paul Helmke, president of the Brady Campaign to Prevent Gun Violence.

"The bottom line is, we make it awfully easy in this country to get weapons," Helmke said.

Only 15 states do their own background checks on buyers of rifle or shotguns, while 26 do their own checks on people buying handguns, according to the Brady Campaign.

Helmke said more states should do background checks because they have better access to criminal databases than federal authorities do and state checks are often more thorough.

Despite what his estranged wife's attorney said is a history of depression and mental health problems, there was apparently nothing in LaCalamita's FBI background check that prevented him from buying the shotgun. It is left up to applicants to admit on their FBI background check form if they have psychological problems.

When LaCalamita requested a handgun permit last month from the Troy Police Department, the check was much more extensive.

Department spokesman Lt. Gerry Scherlinck said he could not comment on why the department chief turned down LaCalamita's request for a handgun permit. But he said the department looks at records that go beyond arrests or convictions.

LaCalamita was arraigned Wednesday on one count of first-degree murder, two counts of intent to commit murder, three counts of possessing a firearm in the commission of a felony, and one count of fleeing and eluding police. A not guilty plea was entered for LaCalamita by the judge.

Police say LaCalamita walked into his former office as employees were scrambling to beat the approaching federal tax deadline and opened fire with the shotgun.