Sara Evans' estranged husband sues one of her divorce attorneys

The husband of country singer Sara Evans is suing one of his wife's divorce attorneys and his firm, alleging the attorney slandered and libeled him with untrue allegations of adultery. 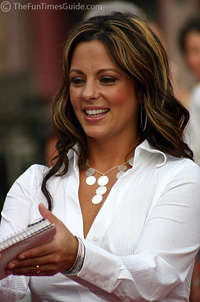 Sara Evans' estranged husband sues one of her divorce attorneys

He contends that Hollins made false statements to the media.

"He (Schelske) was quoted in the press as saying he hadn't done anything wrong and he wanted everybody to pray for Sara," the lawsuit says Hollins told People magazine. "Let me tell you what, everything we allege, we've got photographs to back up the allegations of the complaint."

The suit states that Hollins knew the statement was false and "knew that no photographs existed which depicted the plaintiff engaged in any type of illicit or adulterous activity," Schelske said in the court filing.

Both Hollins and Schelske's attorney, Brad Lampley, declined comment Thursday, citing a gag order for both parties in the case.

The lawsuit is the latest development in the bitter divorce between Evans and Schelske.

The singer's former nanny, Alison Clinton Lee, filed a $3 million (EUR2.23 million) lawsuit on Tuesday against Evans, Hollins, John Hollins Jr. and their law firm claiming she was a victim of "slanderous and libelous" statements in Evans' October 2006 divorce filing.

In the filing, Evans claimed that the nanny had an affair with her husband, which both the nanny and Schelske deny. Schelske later responded that Evans filed for divorce the same day he discovered she was having an extramarital affair.

Schelske, who ran unsuccessfully for the Republican nomination for the U.S. House in Oregon's 5th District in 2002, has denied the allegations.