Ex-Spice Girl Geri Halliwell is writing a series of children's books, that will be released next year. She also has returned to the studio to record its theme song. 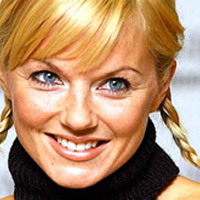 The former Ginger Spice said Thursday she has landed a six-book publishing deal with Macmillan to chronicle the animated adventures of Ugenia Lavender, a bold and assertive 9-year-old girl who balances everyday school life with solving mysteries and working her way out of fantastic situations.

Halliwell, 34, who named C.S. Lewis and Enid Blyton as her favorite childhood authors, characterized one of the unfinished stories she is working on as being a little like "'Alice in Wonderland' meets 'Raiders of the Lost Ark."'

Halliwell said Ugenia is "a very well-rounded human being. She's flawed. She's demanding. She can be a bit obnoxious, but equally she cares about the world she lives in."

Like the members of the Spice Girls - Posh, Ginger, Sporty, Baby and Scary - Halliwell said the supporting characters will have quirky and stylized attributes. There's flamboyant and fashion-obsessed Rudy, Bronty the bookworm and Trevor, whom Halliwell calls a "chunker-wunker" with more brawn than brains.

Halliwell said writing books has been a perfect fit for her lifestyle since she gave birth to daughter Bluebell Madonna last May.

"I'm up in my office, so I can still be with my child," she said, "which is really important for me."

Rumors of a Spice Girls reunion were reignited earlier this year after several band members were seen lunching together. But Halliwell played down the possibility of a musical comeback.

"We'll see," Halliwell said. "At the moment this (writing project) is my absolute passion."

The books will be released at a rate of one a month from May to October next year, with Halliwell's new song included on CD. Macmillan will also release audio book versions with narration and several characters voiced by Halliwell.