Jackie Chan fights villains on the big screen, raises money for charities and records the occasional album. One of his lesser-known jobs is Segway scooter dealer. 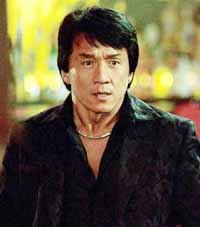 Chan and business partner Matt McGuire have sold the vehicles in Asia for about a year and a half.

McGuire says, however, the dealership has earned a profit and expects it to do well.

When the two-wheeled upright Segway scooter hit the market in 2001, American inventor Dean Kamen predicted it would make the car obsolete in congested cities. It hasn't. The scooter never caught on with many commuters.

Still, Chan is a big believer in the product.

He shipped the battery-powered scooters to Paris recently when he was in the French capital shooting "Rush Hour 3." Chan made his entrance at the opening ceremony of an electronics fair in Hong Kong on Thursday in a Segway, then toured the fair in it.

Chan said the scooter is misunderstood.

"People mistakenly think the Segway is a toy. It's not a toy. Many police officers and rescue officers around the world are using the Segway," he said.

Chan said he became a Segway dealer to promote advanced technology in China.

"I'm not in it to make money. I want to bring high technology back to China. That's the main purpose," he said.

Chan's partner McGuire said the Asian dealership is thriving, having sold "hundreds" of scooters, more than half of that in booming mainland China, where he says the vehicles are being used by police officers in eastern Zhejiang province and security guards at an upscale housing complex in Beijing.

McGuire said the business has turned a profit but declined to give an exact figure.

One market that has been hard to crack is Chan's hometown, Hong Kong, where the transportation department hasn't officially classified the vehicle.

The stiff price tag of the Segway also poses an obstacle in Asia.

"He's very involved in brainstorming. He's been the brain behind a lot of ideas that we've had for trying to educate the public about the availability and benefit of the product," he said.

Chan's interest in Segway is consistent with his wide range of businesses, which have included clothing, restaurants, gyms and cookies.