Maradona released from hospital with warning: no more drinking or excess eating

Diego Maradona left a private clinic after two weeks of treatment for acute hepatitis brought on by alcohol abuse and promised to heed his doctors' advice to watch what he eats and drinks. 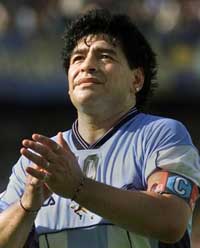 Maradona released from hospital with warning: no more drinking or excess eating

The Argentine soccer hero was taken to the Buenos Aires clinic in an ambulance on March 28 suffering from what his doctor said was too much alcohol, too much food and too many cigars. On releasing him Wednesday, doctors gave Maradona, 47, a stern warning: no more drinking or eating big meals.

Maradona, who has battled weight and drug problems and had a gastric bypass surgery in 2005, said he's listening.

"I'm going to follow the instructions of my doctors to the letter," Maradona told Argentine broadcaster TyC Sports. "If I don't do it, the only one who will be hurt is me ... I'm going to complete my treatment."

Doctors said they believe Maradona, who led Argentina to World Cup glory in Mexico in 1986, is up to the challenge.

Maradona was near death during hospitalizations in 2000 and 2004 blamed on cocaine addiction. Doctors said cocaine was not involved in his current health problems.

In Bogota, Colombia, the doctor who performed Maradona's gastric bypass surgery in 2005 said recently that his refusal to return for regular checkups afterward may have contributed to his woes.

"Any patient who undergoes this sort of procedure needs to submit to regular checkups to make sure they're following recovery instructions, but in Maradona's case there was no follow-up," he added.

Without contact, it was impossible for doctors to monitor whether Maradona was abiding by strict orders to exercise and maintain a low-calorie diet, conditions that are necessary for the procedure to have a lasting success, Holguin said.

Owing to the operation, the 1.68-meter (5-foot-6) Argentine was able to cut by almost half the 121 kilograms (266 pounds) he weighed before coming to Colombia. But in recent months, his stomach had begun to bulge again while seen frequenting Buenos Aires nightclubs and restaurants.

While obesity surgery is gaining popularity worldwide, doctors warn that no matter the surgery used - gastric bypass, stomach-stapling surgery or an adjustable stomach band - the patient's commitment to eating and exercising changes are a must to achieve lasting results.

"Maradona or any other patient with similar issues has to follow a strict diet: fruits, vegetables and mineral water," said Dr. Omar Daniel Marecas at the Eva Peron Hospital. But with Maradona's much-publicized fondness for thick Argentine beef and other treats, he added "surely that will be difficult."

What comes next remains unclear for Maradona, who also helped capture Argentine and Italian league titles in a storied career before retiring in 1997.

His personal doctor, Alfredo Cahe, said Maradona is now surrounded by a team of doctors, nutritionists and specialists. He also said he hoped to send the soccer legend to Switzerland for followup treatment.

But not right away.

Maradona said he has a can't-miss date to see Argentina's biggest soccer match of the season: the annual "superclassic" clash between his former team, Boca Juniors, and its archrival River Plate on Sunday.

As Maradona quipped Wednesday: "I'll go to the match ... even by ambulance if I have to."