Jackie Chan and Jet Li's first movie together will be about an American teenager's fantasy journey to ancient China to rescue a mythological monkey king, the film's U.S. distributor said. 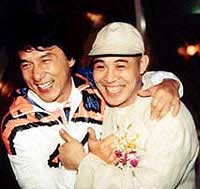 "The Forbidden Kingdom" will start shooting May 2 in movie studios in Hengdian, located southwest of Shanghai, and neighboring locations, the movie's producer Casey Silver said in a phone interview with The Associated Press late Wednesday.

The action movie has drawn attention because it pairs the world's top two kung fu stars. Both Chan and Li had revealed the collaboration earlier but didn't give details about the plot.

Chan, however, did not appear too enthusiastic about the movie.

"I don't have any expectations. It's just making an American movie," Chan told reporters at the opening of an electronics trade fair in Hong Kong Thursday, suggesting the movie was being dictated by Hollywood producers.

The idea for the film originates with the classic Chinese novel "Journey to the West," in which a monkey king, a pig and a friar help guard a Buddhist monk searching for religious texts.

The movie's U.S. distributor, Lionsgate, said in a press release "The Forbidden Kingdom" is set in ancient China and follows an American teenager's attempt to help rescue the monkey king from captors.

The teenager, a fan of kung fu movies, travels back in time after discovering the monkey king's stick weapon in a Chinatown pawn shop.

Li will play the monkey king and a silent monk while Chan will play another monk called T'sa-Ho, said Chan spokesman Solon So.

"The Forbidden Kingdom" is financed by the Los Angeles-based production company Relativity Media.

Chan had said earlier that he prefers shooting in Hong Kong because he can veer away from the action fare he normally produces in the U.S.

"I believe the world is anticipating the movie, but I'm not too involved," he said.

Li said in a recent blog entry that he has tried on costumes for "The Forbidden Kingdom."

He complained about the process of getting a mask made for his character.

"When you have a lot of stuff on your head, you can hardly see and hardly breathe. I feel a loss of self control. Once your air paths are blocked, its a very uncomfortable feeling," Li said.

The film could offer a sharp contrast of fighting styles. Chan is known for his improvisational, defensive moves while Li tends to dominate his on-screen opponents.

Famed kung fu choreographer Yuen Woo-ping, known for his work on the "Matrix" trilogy, will design the action sequences in "Forbidden Kingdom," and Rob Minkoff, who made "Stuart Little" and "The Lion King," will direct the movie.

Cinematographer Peter Pau, who won an Oscar for his work on "Crouching Tiger, Hidden Dragon," will shoot the movie.

Both Chan and Li made their names in Hong Kong cinema before moving on to Hollywood.

Chan was recently filming the third installment of the "Rush Hour" series with Chris Tucker. Li's recent Hollywood credits include "Cradle 2 the Grave" and "Kiss of the Dragon."