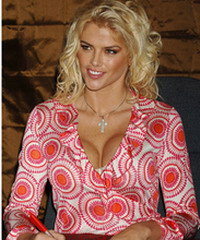 "I told you so!" the Playboy Playmate's former boyfriend said Tuesday after emerging from a closed court hearing. He added: "My baby's going to be coming home pretty soon."

Birkhead then hugged his rival, Howard K. Stern, Smith's lawyer-turned-companion who has been caring for baby Dannielynn since Smith's sudden death in February.

Stern said he wouldn't fight for custody, but a lawyer for Smith's mother, Virgie Arthur, indicated she might. The judge scheduled another hearing for Friday in the pink colonial courthouse to discuss who will raise the girl, who could inherit hundreds of millions of dollars.

Stern said he loved the baby despite the DNA results and would support Birkhead.

"I'm obviously very disappointed, but my feelings for Dannielynn have not changed," he said, adding of Birkhead: "I'm going to do whatever I can to make sure he gets sole custody."

Birkhead, a California photographer, had been fighting for custody of Dannielynn even before Smith's death.

"Nothing's been determined except parentage and I'm the father," Birkhead said. "It's been a long road and I'm just happy to have this behind me."

A crowd of about 250 people, many of them tourists, cheered from behind police barricades when Birkhead, clutching a piece of paper, announced the DNA test results. The court's DNA expert, Dr. Michael Baird, confirmed it.

This tropical capital has been transfixed by the Anna Nicole saga since she moved here last year. Smith gave birth to Dannielynn in September, only to see her 20-year-old son Daniel die days later at her bedside from a lethal combination of drugs. Smith died in February at age 39 in Florida.

Many in the crowd took pictures of the impromptu news conference with cameras and cell phones. One man in the crowd wore a T-shirt emblazoned with the handwritten message: "I'm the baby's daddy."

Arthur, who had been estranged from Smith for years, said she wanted to be present in her granddaughter's life, but seemed appeased by the DNA results.

"I'm happy that Dannielynn will know who her real father is," she said.

The baby, whose full name is Dannielynn Hope Marshall Stern, could inherit millions from the estate of Smith's late husband, J. Howard Marshall II. The former model had been fighting the Texas oil tycoon's family over his estimated US$500 million (370 million EUR) fortune since his death in 1995.