A Naval Academy midshipman faces up to 10 years in prison and dismissal from the U.S. military school after being convicted of sexually assaulting a fellow student at a Washington hotel last year. 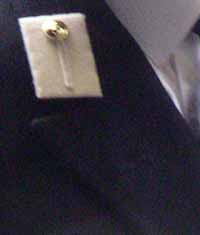 A military jury on Monday found Kenny Ray Morrison guilty of indecent assault for forcing himself on a female midshipman in February 2006. He also was found guilty of conduct unbecoming an officer and a gentleman. The same jury was to reconvene Tuesday to consider a penalty.

Morrison, 24, was cleared of charges that he had sex with another midshipman against her will in April 2006.

The verdict was read after three hours of deliberations and three days of testimony at Washington Navy Yard. Besides possible prison time and dismissal from the school in Annapolis, Maryland, Morrison also faces forfeiture of pay.

The jury of seven Marine Corps and Navy officers heard testimony from Morrison and two accusers.

Morrison claimed the sex at the hotel was consensual, but the woman told jurors she tried to resist his advances. She said Morrison had sex with her three times that night against her will.

A second woman, also a midshipman at the time and now a Marine lieutenant, said she believed Morrison forced himself on her two months later. Morrison did not address that claim on the witness stand, and he was found not guilty of indecent assault in that case.

A former backup linebacker on the Navy football team, Morrison, of Kingwood, Texas, is the second Navy football player to be court-martialed in the past year on sexual assault charges.

A military jury cleared former star quarterback Lamar Owens Jr. of rape last year, but convicted him of lesser offenses. The academy's superintendent, Vice Adm. Rodney Rempt, has recommended that Owens be expelled without graduating. That recommendation is under review by the secretary of the Navy.

Allegations Morrison used a "date rape" drug to help him assault the women were dropped because of problems with forensic evidence.

The conduct unbecoming charge stemmed from the fact that another midshipman was asleep in the hotel room where the sex occurred.

Morrison said it happened after he stumbled across the woman as he tried to find a place to sleep. He said the woman initiated sexual contact by rubbing his leg and kissing him.

But Navy prosecutor Lt. Cmdr. Colin Kisor said the woman only knew Morrison remotely and was asleep in the room because she felt sick after a night of drinking. Kisor wondered why she would suddenly become amorous when Morrison stumbled in on her by accident.

"If you believe him, at the end of the night, he was incredibly lucky," Kisor said.

The second occurrence took place while Morrison was under investigation for the assault at the hotel.

The woman, the Marine lieutenant, said she saw Morrison at an Annapolis bar and accepted a beer from him. Her next memory was waking up more than nine hours later, naked in bed next to Morrison.

Morrison's lawyer, William Ferris, said the woman only suspected, but could not say for sure, that Morrison had sex with her without her consent.