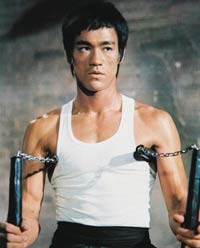 Xinhua News Agency said China Central Television started shooting "The Legend of Bruce Lee" over the weekend in Shunde in Guangdong province in southern China. Shunde is the ancestral home of Lee, who was born in San Francisco.

It said the 50 million yuan (US$6.4 million; EUR4.8 million) production will also be filmed in Hong Kong and the United States, where Lee studied and launched his acting career.

Chen Guokun, who plays Lee, said he has mixed feelings about playing the role of the icon, Xinhua reported.

"I'm nervous and also excited, but I will do my best," Chen, who's also known as Chan Kwok-kwan, was quoted as saying.

Chen, best known for appearing in the action comedy "Kung Fu Hustle," says Lee has been his role model since he was a child and that he has practiced kung fu for many years.

The TV series, which is due to be aired in 2008, the year Beijing hosts the Olympic Games, appears to aimed at highlighting Chinese culture in the run up to the event.

The Chinese government also views John Woo's upcoming historical epic "Red Cliff" as a showcase of Chinese history and wants it released before the Olympics, Woo's business partner has said.

"Red Cliff" is based on a war of the same name in 208 A.D. that determined the geography of the Three Kingdoms period, when China had three separate rulers. It stars Chow Yun-fat, Taiwanese-Japanese heartthrob Takeshi Kaneshiro and Taiwanese model Lin Chi-ling.

In Bruce Lee, Chinese filmmakers have seized on a powerful symbol of Chinese nationalism.