Indian actress Vidya Balan says rumors about her romantic liaisons with co-stars are ridiculous and that she hasn't found Mr. Right yet. 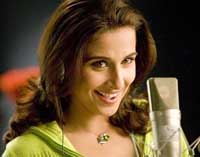 Tabloids and film magazines have linked Balan to her co-stars Sanjay Dutt and to fellow model-turned-actor John Abraham.

"We got along well enough for people to notice. But an affair? Have a heart," she said in an interview published in The Asian Age newspaper Tuesday. "I haven't found a man I'd like to spend the rest of my life with."

Balan, 29, a model-turned-actress, had a dream debut in 2005 in the blockbuster "Parineeta" or "The Married Woman," a Hindi film about relationships. Since then she has got noticed for her roles in "Salaam-e-Ishq," or "Salute to Love," and "Guru."

"I'd rather be interesting than be known for my linkups," Balan added.